THE DRAGON AIRFRAME IS A Robust, modular, CUSTOMIZABLE PLATFORM FOR A VARIETY OF APPLICATIONS

The pure-X Dragon Airframe was engineerd to translate the simplicity, cost-effectiveness and structural performance of FPV and Racing drones to an upper class of industry-specific applications that require extremely high flight performance and thus, higher quality standards.

The necessity to increase the aircraft’s general sizes to accomodate larger payloads along with the goal of being able to reach extremely high flight speeds, imposed to re-design from scratch a new concept of airframe made entirely in full carbon composite suitable to be equipped with overpowered engines and even over-squared propellers.

Designed like a tank, to provide structural safety even under extreme combinations of payload and g-force during aggressive maneuvering, the Dragon Airframe was designed in every single aspect with modularity and simplicity in mind.

The basic Frame concept has 6 mm thick arms made of full carbon composite (Toray Carbon prepreg layers) as long as all the 3 mm thick plates.

The Main Central Plates (Short and Long Aisle versions – respectively 270 and 450 mm long and both 130 mm large) were designed to fit with both the SX4 and LX4, to give life respectively to the versions “Short-Aisle” (SX4-SA, LX4-SA) and “Long-Aisle” (SX4-LA, LX4-LA).

Tough and modular, it is designed to offer several customization, even on-demand basis.

Finally, the the main plates come with a hole set that fits with several commercial and mass- market Flight Controllers, Autopilot and Companion Computers, so as to allow users to customize the Dragon for a moltitude of use cases.

The Dragon Airframe is the perfect choice for heavy-powered Racing, Freestyle FPV or for professional applications like Cinema, Inspection, or even Research.

Need custom parts and components to adapt the Dragon Airframe to your specific needs? No fear, drop us a line!

All the Dragon Frames can be chosen also in a monster x8 configuration, for increased payload, speed or only endurance or range.

The X8 frame is equipped with ultra strong 12 mm arms (made of two layers of 6 mm arms, to avoid single point of failure in the case of a crash)  and a couple of a minimum 3 mm thick full carbon plates as motor mounts.

Discover the technical characteristics of the EXPLORER ONE NANO UAS, the most compact professional drone for day and night reconnaissance and inspection.

EO or Thermal camera output is selectable via tablet or RC transmitter.

With an intuitive touch-screen tablet, Explorer Nano UAS can be controlled manually or programmed for autonomous navigation via GPS waypoints.

Manual control technique requires a minimal training, and the operator can learn to fly and operate the Explorer UAS in minutes, not hours.

Flight modes and flight plan can be changed or updated during the mission with a simple dedicated software interface.

FrSky X series, D series and V8-ll series receives (plus other receivers if an external module is used)

270mA maximum (both RF module and backlit are on) 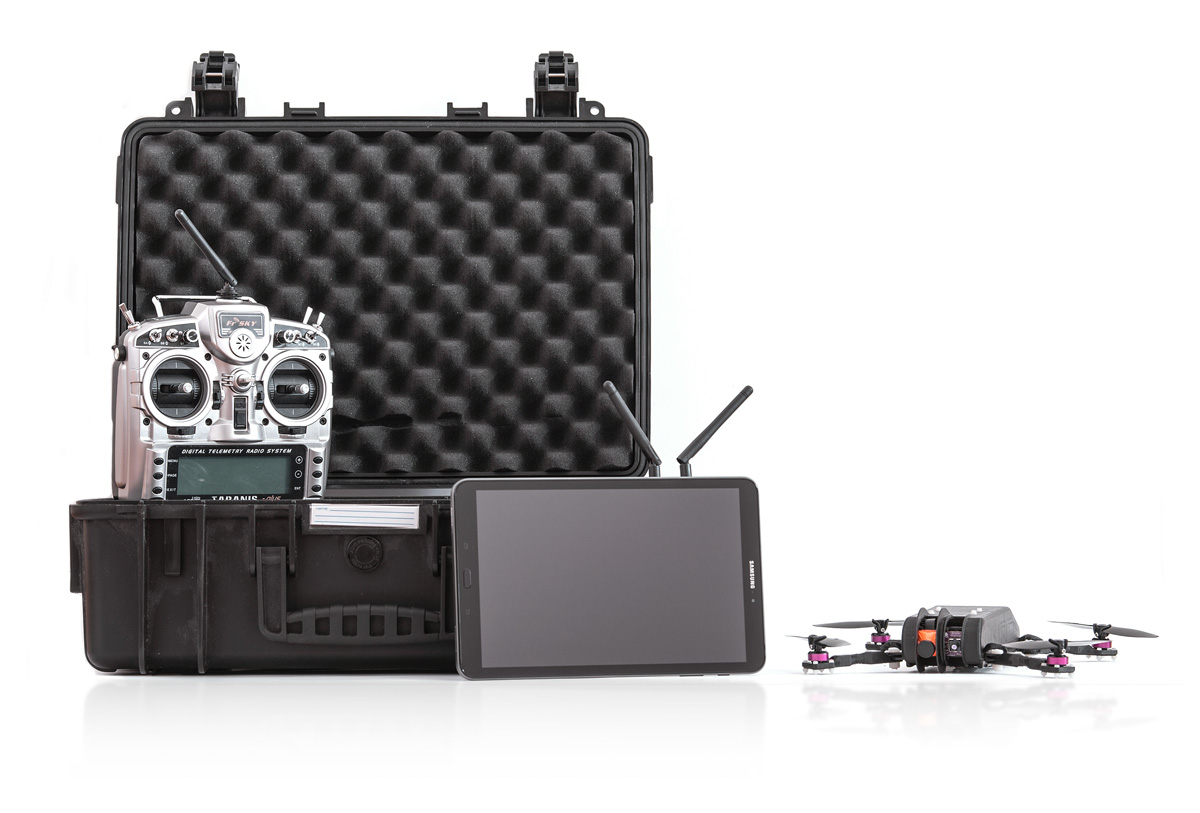 Get your customized Dragon Frame and start flying!